The Tortilla’s History: A Look Back Through Thousands of Years

History of the Corn Tortilla

Tortillas are everywhere today. The thin, unleavened pieces of flatbread are in thousands of restaurants, taco stands, and grocery stores across the nation, and they’re the most popular ethnic bread across the globe. But where did they come from? Where have they been? Let’s journey through time.

A Tortilla as Old as Time

Tortillas have been around for thousands of years. Mayan legend says that the first tortilla was a gift. As the story goes, a peasant invented the corn tortilla as a present for his hungry king over 12,000 years ago. In the ancient highlands of modern Mexico, tortillas were a staple in both Mayan and Aztec diets.

When Spaniards arrived in Central America in the 1500s, they discovered that the indigenous people all ate some sort of bread made from corn. Mayans ate corn off of the cob, but they also ground corn into cornmeal. The cornmeal was then used to create a corn dough called masa. The Spanish conquistador Hernán Cortés wrote a letter to the Spanish King Charles V in 1520. In it, Cortés described the public markets as places where one could find “all kinds of merchandise that the world affords… as for instance, articles of food.” Cortés went on to describe the main staple of the native diet: “maize or Indian corn, in the grain and the form of bread.”

The term “tortilla” comes from the Spanish word for “little cake.” The Spanish named the tortilla after it was brought over to Europe from Central America. However, in parts of southern Spain, a tortilla is made of chickpea meal and is crips, thin, and fried. While they look very similar to corn tortillas, these chickpea tortillas originated in Greece and were brought to Spain by Arabs hundreds of years ago.

Another 16th-century Spaniard took note of the Aztec food staple. Bernardino de Sahagún traveled to Central America in 1529, where he then spent more than 50 years. Sahagún studied Nahuatl, the native language, and other Aztec cultural beliefs and traditions. Sahagún was a missionary priest and was primarily devoted to spreading Christianity in “New Spain.” He wrote that Aztecs didn’t just use corn in their tortillas, but also squash. He even recorded some varieties of tortilla that incorporated turkey eggs and honey.

Spaniards introduced wheat flour to Central America when they brought it over from Spain. Then, flour was used to make tortillas. Even today, flour tortillas are considered unique to the Mexican highlands. 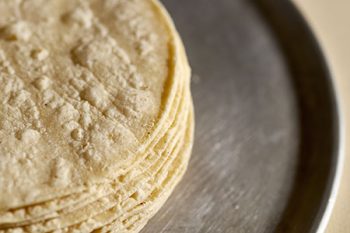 Ancient Central Americans made tortillas with a process called nixtamalization. The corn kernels soak in a solution of lime and water. This process removes the kernels’ skin, and then they are ground into a dough. The dough (masa) gets divided into golfball-sized portions. Then, the preparer pats the dough into a thin circle and places it on a hot grill. People in southern Mexico still use this traditional process to make tortillas.

In the mid-twentieth century, manufacturers mechanized the traditional tortilla-making process to meet the growing demands of cities and the increasing population. Interestingly, one of the first widespread uses of electric motors and gas engines was to provide power to wet-grain grinders. These wet-grain grinders made masa, but people were still needed to form the dough into tortillas. However, in the 1960s, small-scale machines were capable of producing cooked tortillas every two seconds.

Where Are We Now?

Tortillas are one of the most popular bread products around. Specialized tortilla-making machines can produce 60,000 cooked tortillas in an hour, a long way from the painstaking traditional process that made one tortilla at a time. Regular maize tortillas are available, but so are flour tortillas. One can find various flavors and types of tortillas in most grocery stores.

The Tortilla Industry Association in the United States estimates that the tortilla industry, which includes tortillas, tortilla chips, tostada shells, and taco shells, is a $6 billion industry. Tortillas are more popular than bagels or muffins in America and are second only to sliced bread.

Flour tortillas are one of the United States astronauts’ favorite foods and not just because they’re delicious! Since 1985, NASA uses tortillas as a solution to a bread crumb and gravity issue. Astronauts had a hard time handling much of the food supplied to them on shuttle trips, but tortillas proved to be an easy way to eat a meal in space. The only issue with most commercially-made tortillas nowadays is mold. If an astronaut works in the orbiter, there’s no refrigeration, and then mold can grow. Never fear, NASA found a solution: shelf-stable tortillas. By removing oxygen from the package, no mold can grow, making the tortillas safe for the astronauts to eat. NASA also made sure to reduce water activity and pH in the tortillas to avoid any potential problems out in space.

No one could read this much about tortillas and not want to eat one right away. Don’t worry, we’ve got you covered here in Olympia, Washington. Come to Mayan Family Mexican Restaurant at any of our three locations in the area. Check out Monday night happy hour specials while catching the football game on TV or enjoy some margaritas with friends on a weekend afternoon.

In addition to classic favorites such as fajitas, tacos, and enchiladas, Mayan Family Mexican Restaurant’s menu boasts other Mexican specialties. Try something new like albondigas, our meatball and vegetable soup, or end the meal with a delicious dessert like fried ice cream. No matter what craving hits, Mayan Family Mexican Restaurant’s extensive menu is sure to have a suitable option for all members of the family!

Also, the Mayan Family Mexican Restaurant can help customers with offsite events. Not only do we provide excellent food, but we strive for excellence in customer service. Rest assured that a professional team will make sure the food at that corporate event or wedding party is hot and delicious!

Now that everyone is hungry and craving tortillas, call Mayan Family Mexican Restaurant at (360) 491-8244 today to make a reservation at our Pacific Avenue location!

Posted on October 9th, 2019 by Mayan Family Mexican Restaurant
The Tortilla’s History: A Look Back Through Thousands of Years